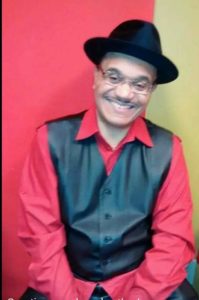 Randy T. Skinner is available as a professional musician on your project, as an artist and as a private music instructor. As an accomplished trumpeter, he began to play brass instruments in grade six while enrolled in the Virginia Public Education system. Throughout his childhood years he listened to and imitated a wide array of musicians from Kool and the Gang, Earth, Wind, and Fire to Freddie Hubbard, Lee Morgan, and Wynton Marsalis. Randy expanded his music repertoire during his high school years and began to play R&B professionally with a local band, The Mighty Impersonators. He also played professionally on military bases and in clubs in the Virginia Beach area.
Upon graduation from high school, Randy accepted a music scholarship to attend Shaw University in Raleigh, North Carolina. His college senior recital showcased his talent and skills on the French horn and trumpet and included Strauss Horn Concerto 1 and Mozart Concertos for horn. Randy’s training in music continued when he enrolled at the Berklee College of Music in Boston. While in Boston he participated in and facilitated the Tanglewood Summer Music Workshops for inner city youths. These workshops were sponsored by WGBH, The New England Conservatory, The Wang Center for the Performing Arts, and The Boston Symphony Orchestra. In addition to performing nightly with R&B and jazz bands, Randy became a music educator in the Boston School System where he was instrumental in developing programs for his students and conducting seminars which included lectures and demonstrations by professionals and personal friends, Wynton Marsalis, Christian McBride, and Rumus Barrett. He also befriended his all time influence, Freddie Hubbard. The acquaintance developed into a friendship that continues today.
A renowned musician whose professional experience has run the gamut of styles from gospel (12th Baptist Brass Ensemble), to popular R& B (The Chi-lites, Jean Karn, Norman Connor), from soul (Sam&Dave), to jazz (Rumus Barrett, Eddie Harris, Freddie Hubbard,), from funk (George Clinton and the P-Funk All-Stars) to dance (Impulse Dance Company), Randy T. Skinner has been praised by many respected musicians. He has played at the following local venues: Turner Field, Fox Theater, Lakewood Amphitheater, Chastain Park, The Apache Club and Atlanta Symphony Hall with Ray Chew and The Crew for the Atlanta National Black Arts Festival.
He has also performed in almost every major city in the U.S. and abroad including Munich, Zurich, Kalon, Paris, Amsterdam, Brussels, Belgium, and Switzerland.
Randy is now based out of Atlanta, Georgia, where he performs with numerous bands in the Southeast area including his own group, Skin-Tones in Pursuit. The SKIN-TONES IN PURSUIT CD, features the legendary, Fred Wesley (former musician for James Brown) on trombone and Master Percussionist Jef Wah. Randy has emerged as an outstanding trumpeter with a captivating style, accentuated by an eclectic fusion of jazz, blues, and funk. 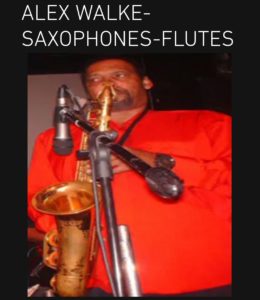 An amazingly creative and talented saxophonist and flute player Alex holds true to his astrological sign of Libra. The symmetry and balance of his performances is simply awesome. He has an unusual ability to play in such a way that does not over shadow fellow musicians yet he stands way above the crowd when improvising and playing solo. His lifelong love affair with music and the saxophone began in middle school. He was so intrigued by the saxophone that he started studying sax method books a couple of years before he actually got his first saxophone. His sister purchased his first saxophone because she could see his promise. He cites Eddie Harris as one of his first influences on sax. He later picked up the flute studying and emulating jazz greats such as Hubert Laws and Nelson Rangell.
He studied Music and Media at Norfolk State University. He has performed with national artists “Tom Browne”, “Bob Baldwin”, “Roy Ayers”, “Levi Little (Black Street)”, Stax Recording artists “N’Dambi”,“The Soul Children” and “William Bell”, and most recently artist/arranger/producer “Norman Conners and His Starship Orchestra”. His awesome saxophones and flutes can be heard on the soap opera theme for “Another Life”, CBN cartoon themes “Flying House” and “Super Book”, Levi Little’s “Star Ship” CD, Contemporary Christian Group-Isaac’s “City of Dreams” CD, and his own cds “Merry Christmas 2007” and “Part of Me”.
His teaching experience includes private lessons for intermediate level students and professionals at Norfolk State University. He has served as a consultant conducting music workshops for Hampton High School with recording artist Tom Browne and with Dr. Alan Colon at Hampton University and Dillard University. He currently performs with Total Package Band and Rod Kelley as well as various other freelance events including his divinely inspired “Sax-o-grams”. Additionally, he is the resident saxophonist for Christ Temple Fellowship Church in Decatur, GA. Most definitely you can look for more to come from this musical gem…

JEF WAH-PERCUSSIONS-VOCALS
 
Experienced master percussionist, professionally trained in various genres of music, ranging from Jazz, Funk, Neo Soul, Salsa, Gospel, R&B and more….Jeff Wah has performed with Marvin Sease, Brick and S.O.S Band. Equipped for studio/gigs and tours….also trained in lead and background harmonies, establishing ( In The Pocket Rhythyms). For the desired occasions and looking the professional part that is needed on stage. 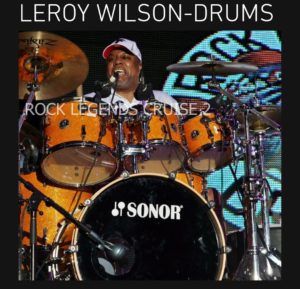 Leroy started his career at age 13 with his first major tour up and down the Atlantic seaboard. He later attended Virginia State University, where he studied with David Chambliss of the Petersburg (Virginia) Symphony Orchestra. After college Leroy joined the United States Air Force where he was selected as drummer for the Air Force’s premier touring group, “Tops In Blue”. Leroy’s military and musical career next took him to Frankfurt, Germany. There with the R&B group Patrol, he toured much of central Europe playing events such as the renowned Wiesbaden Winefest backing Sony Europe recording artist, Paris Red. After returning to the US and becoming a full time Air Force musician, he began touring extensively. Leroy has performed for literally millions young and old annually. Engagements of note are dates featuring Take 6, Aaron Neville, Brian McKnight, Gordon Goodwin of Gordon Goodwin’s Big Phat Band, a cameo with Vital Information, and Angie Johnson (The Voice season 2). Worldwide tours have featured such artists as the Grammy award-winning Hootie and the Blowfish, Blues Traveler featuring John Popper, Restless Heart, Jamie O’Neal, Lee Greenwood, Jessie James, The Chris Hicks Band, and The Marshall Tucker Band. 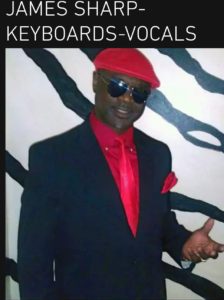 James W. Sharp AKA ‘Sharpio’ was born with a love, gift and understanding of music. He began taking piano lessons at the age of six. After hearing a song only once or twice, he could play the music perfectly, but in his own key. He taught himself how to read music, and at age 10, quickly learned to play percussion, strings, brass and woodwind instruments. However, his passion returned him to his first and constant love: the ever versatile keyboard.
This multi-talented musician began to perform professionally at the age of 14 in churches, as back up for vocalist, and in concert halls. Sharp earned a BS in Business Management from the University of South Carolina in Columbia, SC. During that time, he expanded his musical gifts by performing in several states including North Carolina, Georgia, New York, New Jersey, Massachusetts and Connecticut.
In 1970 Sharp became the co-founder of the group “Primitive Expressions” and some of the tracks of those albums are still selling today under his DBA of ‘Sharpio’.
Along with his wife of 39 years, Lee Cummings and their three children, Sharp moved from Hardeeville, SC to Atlanta, Georgia in 1980, where he currently resides.
In addition to his wide range of instrumental abilities, James Sharp is a very talented lyricist and has a mind- boggling five octave vocal range. His talents continued to bloom in Atlanta, and he has performed and/or recorded with several artists. These include Stevie Wonder, Isaac Hayes, Curtis Mayfield, Archie Bell and the Drells, Betty Wright, and Felton Pilate of Con Funk Shun.
Mr. Sharp has parlayed his stunning and dynamic musical gifts into one of the hottest one man shows in the Atlanta, Georgia area, and plays at night clubs and other venues. He also plays with, or opens for several renowned artists.
James Sharp” takes charge of this musical creations” by writing and arranging all tracks of his new blockbuster CD, “SHARP IN THE RED”. It is Edgy, Sassy, Funky and Bold. It features HOT new songs such as “U Wanna Use Me” and “No Mor, No Mor”. But James absolutely pollutes the grid with the smooth and silky “Private Party”. Sharp sings the lead in all tracks, and contributes to the background in most of the tracks of this dynamite and unbelievably explosive musical experience.
Sharpio’s music is enjoyed by most who love Jazz, Blues, R & B, Adult Contemporary, Gospel, The Golden Oldies and County Music. James Sharp’s music is both mellow-tame and wildly energetic. 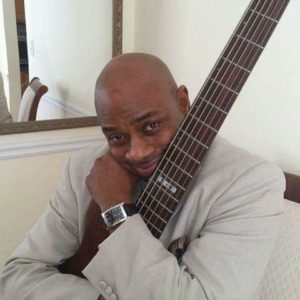 AL “Space Bass”LEE
My musical journey started at the age of 5. I recall learning about beats and rhythms by sitting on my mothers kitchen floor beating on shoe boxes and crisco grease cans with sticks and clothes hangers. My dad took noticed and bought me a drum set, and a lead guitar. I took my first music lesson on the lead guitar at the age 8. While playing that, I saw a young man sitting on his porch playing a bass guitar, I told my dad I wanted one and that’s when I discovered my love instrument. I was about 11 when I got my first bass guitar. It was then I became influenced by gospel greats like the Five Blind Boys, the Jackson Southernairs from Mississippi any many more gospel greats. In addition, As I grew older, I started listening to Jazz ,Blues ,Funk, R&B, and Rock In Roll. I started learning Bass Grooves from the Rolling Stones, Larry Grahm,BB King, Sly Stone, Cameo, Bootsy, George Clinton, EWF, Louis Johnson, Stanley Clark , Nathan East, Marcus Miller, Jaco Pastoriuos, Victor Wooten, Mark King of level 42 and many many more. I have been laying bass grooves down now for about 40 years. The way I see it if ain’t got no groove if it ain’t got no pocket and if it ain’t got no pocket it ain’t got no groove. My mission is to keep it smooth groovy tight right and funky. 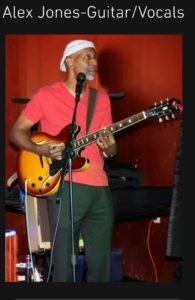 Alex Jones started playing guitar at an early age in west Philadelphia At 14 he joined his first band, The Mixed Emotions, which featured four friends who played parties, small clubs, and cabarets. He played throughout his high school years but in 1976 put down the guitar to attend Howard University. After marriage and four children, he picked up the guitar again when his youngest graduated high school. He joined The Sana Band, an Atlanta blues group, and now plays blues, soul, funk and rock on guitar and bass with several Atlanta groups. His mantra, “Keep the groove,” keeps Alex on the 1.